Rolling out crust for Thanksgiving pies makes me ruminate about kitchens.  We’ve never hosted Thanksgiving ourselves, but I’ve made pies most years; it seems to be one thing that hosts are happy to farm out to guests, and it happens to be my favorite part of Thanksgiving cooking. Our first condo had four small peacock green squares of counter.  At any given time only one was free for cooking.  Making pie crust meant clearing small appliances off of a square or two and then inevitably bumping my elbows into the wall next to the counter.  Our next apartment had a small kitchen with a luxurious granite island which was perfect for rolling crust, and even better for displaying the finished pie.  In our current apartment we have a very large kitchen; most of it, though is empty space bisected by a beautifully awkward beam that holds up this end of the building.  We’re left, once again, with not much pie-making space.

Our new kitchen is not big, but we’ll have a huge island where I can see us rolling out pie crusts, pasta, and even chapatis, the traditional Indian flatbread I grew up eating.  And, we went really, really local for the countertops.  The stone is being quarried from the ground just 25 miles northwest of here, where an enterprising family stumbled upon a deep source of schist in their backyard.  Schist is a durable metamorphic rock, and in this case is a several million year-old geologic map of our area. It is beautiful in its simplicity, and truly a local product produced by local workers. 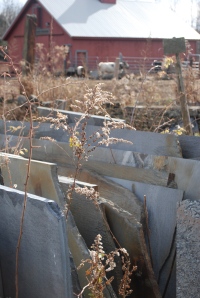 A selection of stone.

This saw blade is taller than me. 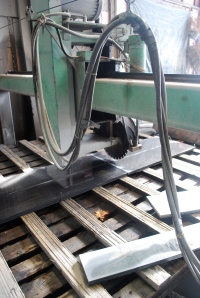